In this episode I interview Florian and Shannon Radke from Cinnaholic, a vegan bakery franchise offering hand-made vegan cinnamon rolls with more than 30 different flavors and toppings.

The couple, who are both animal activists and ethical vegans, met through the Couchsurfing.com website in 2008 in a group for vegans and vegetarians where Shannon offered to take like-minded travelers on a tour of San Francisco. Florian was planning a trip from his native Germany to couch-surf around California. 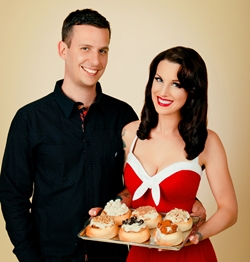 Shortly after meeting in person they fell in love. Shannon – who’d worked in various administrative jobs and copywriting – also discovered another passion: Baking.

With Florian’s vast experience in brand marketing through his successful creative agency in Berlin, Cinnaholic was born, with the first location opening in 2010 in Berkeley, California. Another five locations, including Nevada, Texas and Georgia followed.

In 2014 the couple appeared on the TV show Shark Tank and pitched their venture. They received an investment deal from Robert Herjavec worth $250,000 to develop their online business. After initially accepting the deal, they realized Robert had a different vision for the company and they parted ways – very amicably and he’s continued to be very supportive.

Despite walking away from a quarter-of-a-million-dollar deal, in 2015 the pair announced plans to launch an additional 25 Cinnaholic franchises across the US.

In this interview Florian and Shannon talk about:

•    Why they chose a franchise model to grow their brand