In this episode I interview Adam Sobel, founder of The Cinnamon Snail food truck and restaurant in New York.

Adam worked as a chef for several vegetarian, vegan and vegan-friendly restaurants for more than 12 years before launching the food truck in 2010. Since then he’s grown the business into a vegan food empire that employs more than 50 staff. 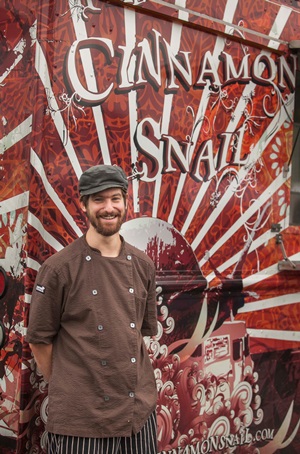 As well as a permanent eatery at the Pennsy local food hall in downtown Manhattan, the company also has a catering arm and an online store as well as providing wholesale donuts. The food trucks continue to service New York and New Jersey for select public events.

The company has won several awards, and Adam also the author of Street Vegan, a cookbook on vegan street food.

When he’s not working at The Cinnamon Snail he teaches free yoga classes and rescues animals (in fact, he had a very cute Australian mammal on his bed during our interview!).

In this interview Adam discusses:

•    Why he launched a food truck business

•    The challenges and benefits of running a food truck business

•    The importance of listening to your customers and giving them what they want, not what you want